Business and Economy of Jharia

The city of Jharia being popularly called as the ‘Land of Coal Mines’, is one of the eight development blocks in the Dhanbad district of Jharkhand state. The city of Jharia is known for its rich and abundant reserves of bituminous coal, used for making coke in blast furnaces. It is home nine huge open cast mines and 23 huge open cast mines. Jharia is thus an important commercial and industrial centre, and is one of the fastest developing cities in Jharkhand.

Though mining in Jharia started way back in 1894, the mining activities gained momentum only in the year 1925. It is believed that the railway contactors from Kutch in Gujarat were the first ones to start coal mining in the coal fields of Jharia. Before they plunged into the business, the coal mines were being exploited by the British. Balihari, Khas Jeenagora, Khas Jharia, Golden Jharia, Fatehpur were some of the collieries that were established initially in Jharia. Seth Khora Ramji, from Kutch in Gujarat is believed to be the first Indian to begin with coal mining in Jharia city. After the nationalisation of mines in 1971, many steel plants came to be set up near the city of Jharia and steel companies started taking Jharia coal fields on lease. 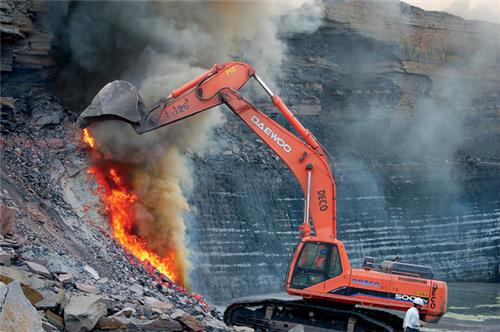 Jharia coal field fires were detected first in the year 1916. Khas Jharia and Golden Jharia, were the first ones that were victims of this fire. Despite sincere efforts by the authorities in Jharia, the fires could not be prevented from spreading and causing substantial damage. The earthquake that had occurred in Bihar in 1934, worsened the situation by causing the underground fire to spread further.

After the nationalisation of mining, Bharat Coking Coal Limited (BCCL) has been appointed as the official operator of the mines. BCCL is a public sector undertaking that meets almost half of the requirement for prime coke coal of the steel sector. Many reputed companies like IISCO, SAIL, Tata Steel have taken on lease the Jharia coal fields. BCCL conducts open cast mining in Jharia coal fields. However, the coal fields are home to a number of railway lines, water bodies, urban settlements in the coal fields, the coal seams cannot be exploited to their fullest. Apart from meeting the coal demands of the country, these coal fields also provide employment to numerous miners, who depend on coal mining activity, for their livelihoods.

However open cast mining carried out in this city has given rise to numerous problems including poor safety conditions, illegal mining, failure to adhere to the appropriate norms etc. Associations like Jharia Action Plan (JAP) and Jharia Rehabilitation and Authority (JRDA) have been set up to help rehabilitate and relocate the people here and thus make full use of the resources that still lie unmined and unutilised.

Due to extensive mining activities, the soil here is red and thus not fertile and unsuitable for agriculture. However, a few people have engaged themselves in agriculture. Jharia is home to tropical and sub-tropical dry broad leaf forests, and trees like Sal, Sisam and Mahua can be found in the city of Jharia and its adjoining areas. Crops like whet, maize, paddy are cultivated by the people here. Mostly dry land agriculture is carried out here.

Comments / Discussion Board - Business and Economy of Jharia